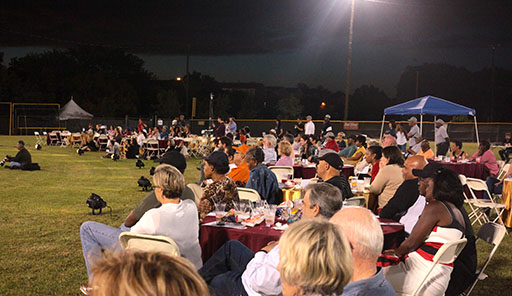 Six Square is leading an ongoing project to improve the historic Downs Field ballpark and revitalize its use in the community. Downs Field, designated a historic landmark by the Texas Historical Commission in 2013, was home to the Negro Baseball League’s Austin Black Senators, Austin Black Pioneers, and Austin Greyhounds and has seen the likes of baseball greats Satchel Paige, Willie Mays, Jackie Robinson, and Austin’s Willie Wells. Today it is home to the Huston-Tillotson University Rams baseball team and the Austin Metro Baseball League.

Located in the District, Rosewood Courts is the first public housing complex for African Americans in the United States, and was constructed on the site of Emancipation Park, an important landmark of Austin’s Juneteenth legacy and African American history in Texas. As the Housing Authority of the City of Austin considers various plans to revitalize Rosewood Courts, Six Square has assisted with efforts to ensure that the revitalization honors the legacy of the structure while best serving current and future residents and the District as a whole.

Six Square has worked to preserve the stories about the people whose lives and work built the strong foundation for other generations to come. Those stories have been preserved in a number of different ways including through our partnership with Spectrum Theater and their historical reenactments of people buried in Oakwood Cemetery, like Jacob Fontaine who is buried in an unmarked grave. We have written stories about the lives of esteemed educators, professionals and other historic figures in local magazines, community newspapers and numerous audio and video recordings. In June 2018, we video recorded the 2018 National Original Old L.C. Anderson all class reunion.